It was on a sales call when I worked at Apple back in the glory days when I truly learned that sales professionals need critical support within their own organizations to be successful and that employees in those organizations must understand that they exist to support the drive to Sales. This epiphany eventually led to the creation of the Institute for Excellence in Sales and also to participation in a new sales support community called the Sales Enablement Society. Here’s why the IES is partnering with them.

One of the exciting side benefits of creating the Institute for Excellence in Sales (IES) has been meeting motivated people who are also committed to helping selling organizations get better. The IES was created to be of service to the selling professional. Our programming, such as the upcoming Women in Sales SELLING Edge Conference in Northern VA on October 6, is a good example of a custom program provided to a specialized group of sales professionals.

The IES was designed first and foremost to help selling professionals improve their jobs, careers, and lives. The IES audience is comprised of senior, mid-level, and junior sales professionals, plus service professionals who simply want to get better at sales.

Earlier this year, I participated in the formation of a new organization – the Sales Enablement Society – which is a group of professionals who are looking to add value to those people in “sales enablement” positions. The Society’s mission is a great complement to our mission at the IES which is why I’m excited to be a founding partner. 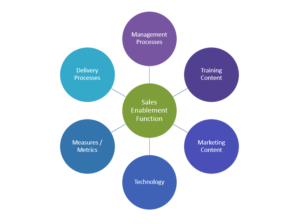 One of the founding members, Brian Lambert, wrote a great article about the sales enablement function job responsibilities which he said are geared towards helping sales professionals be successful. Brian said, “This function works with executives and sales leaders across sales, marketing, and product groups to improve revenue consistency through proactive and structured initiatives and coordinated efforts.” This is described in the graphic on the left.

The Sales Enablement Society has progressed a long way since the first meeting and I’m excited to see the synergy with the Institute for Excellence in Sales.  To get a nice summary of the Society’s chronology to date, check out this article by Society founder Scott Santucci.

SERVICE TO THE SALES PROFESSIONAL IS WHAT MADE SENSE TO ME

At a recent Sales Enablement Society meeting, someone asked me why I created an organization that was of service to the selling professional.

I appreciated the interest because I had frequently reflected on this question as we’ve made remarkable success ramping the IES over the past few years.

Prior to the IES and to running my 12-year old marketing consulting practice, I was in product marketing or marketing communications roles at tech companies such as Apple, Compaq and a large software company called Compuware. These companies and my client companies, such as Microsoft, were constantly focused on maximizing sales and optimizing the process.

I realized along the way that it is the responsibility of every division in the company to remove the obstacles to the sales process. That’s the mission of the IES, and I soon learned, the Society as well.

One of the first times I learned this was when I was working for Apple Computer’s Federal Systems Group (FSG) in Reston, VA. The sales team was quite strong boasting a roster of reps with pedigrees from Xerox and IBM, the golden standards at the time.

FSG was new with not many processes in place. Sales reps were spending too much time doing ancillary customer service and marketing support tasks that were taking them away from prospecting and account development activities. Each rep had their own accounts and had responsibility for growing them. Their plates were full.

I was the Federal customer service manager at the time. My job was to train and support Apple’s resellers to the government market. I made it a point to spend as much time in the field with the sales reps as possible. It was one of the ways that I was measured by my boss who insisted that our worth was measured by how much value we provided to the sales team. That made sense to me.

One day, I was privileged to travel with one of the more aggressive and successful reps. I asked her what her biggest challenge was. She said that she was spending too much time supporting existing customers and didn’t have as much time to upsell and grow her accounts. She said if these support functions could be taken off her plate, she’d be much more productive in the 22 days a month she had to sell. The support functions were taking up 20% of her time and were bogging her down.

I surveyed a handful of other reps who were dealing with the same problem which was limiting their potential to increase sales. Since Apple computers were not the standards in most government agencies, or corporations for that matter, in many cases average customers, and not IT, were forced to support them. These were the types of people who were constantly calling the sales reps for help.

After some brainstorming, we came up with the Apple Federal Support Coordinator (FSC) program. We asked the reps to give us the names of the key customers they were taking calls from once the account became a customer. We then invited these FSC’s to monthly events where we presented new products and spent time answering their questions about existing ones. We created a community of peers they could also refer to.

Everyone was happy. The customers were getting deeper access to Apple and getting the answers they need to support their teams. The reps weren’t spending their limited time on non-revenue driving activities. As a support group, we were adding value to the sales process and this was recognized across the company.

Examples such as this helped me understand that everyone in a support, marketing or admin role needs to understand that they must be of service to sales, first and foremost, to have value.

As the Founder of the IES, I decided to also play a role with the Sales Enablement Society because they have the same mission. It became clear to me that the Society was looking to solve a problem the IES wasn’t focused on. The position of sales enablement professional is becoming one of the most important positions in the sales supply chain yet it’s still in its definition stages. Who should this position report to? What’s the career path? How does it show its value to the C-suite and the sales leaders it supports?

The Society has now created its mission, group leadership, and direction. Recently, a number of early stage members were asked to acknowledge ourselves as Founding Members, which many did. You can check out my Linked In profile and see where I now have this listed in my Groups section. It’s a nice adjunct to our IES efforts. It’s not a new position (the IES takes up most of my time!) but a role I’m excited about.

I’ve met a growing number of sales enablement professionals who are serious about their work, committed to their mission, and driven to improve their company’s selling endeavors. They have been helpful in inviting their sales leaders to IES programs.

If you know someone who boasts the title of sales enablement professional, send them to the Sales Enablement Society website to join. The headquarters chapter is in the DC region and new chapters are being formed throughout the country.

HOW TO LEARN MORE ABOUT THE SALES ENABLEMENT SOCIETY

Also, you can register for the IES Women in Sales SELLING Edge Conference 2016 now. It’s a program we developed to respond directly to the unique needs and goals of our women sales professionals.

the IES is your trusted partner for sales speakers, training, content, programs, coaching, services, and products.

We are all about helping selling professionals improve their trade .

We bring the world's top sales thought leaders to sales professionals and leaders to help make their selling more effective.

I have learned a great deal at the IES programs. As someone's who is new to a career in sales, I'm taking every opportunity to get exposed to as much as I can as quickly as I can. This is a great place to get up to speed on important sales topics.

I was honored to be a speaker at the IES and to have attended most of their programs. The quality of the attendees is first class and the level of professionalism is astounding.