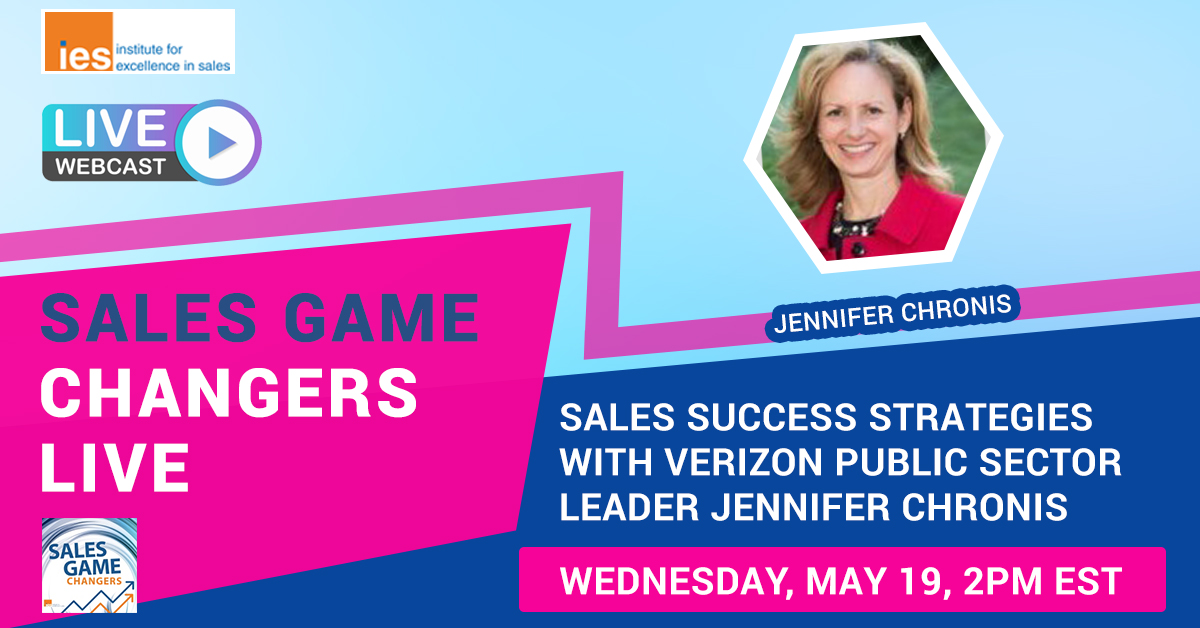 Every week, IES cofounder Fred Diamond brings world-class sales leaders on the Sales Game Changers LIVE webcast to discuss how they’re working with their customers and managing their teams of sales professionals for world-class results.

This week, we are fortunate to bring on Jennifer Chronis, Verizon’s new Public Sector Leader.

We’ll get insights how her market has developed over the past year and how Verizon has responded to its challenges.

If you sell enterprise solutions to Federal, public sector, or other markets, you do not want to miss this webcast.

Jennifer Chronis is the Vice President of Public Sector at Verizon where she has responsibility for all facets of Verizon’s business with the US Federal government, to include the Department of Defense, Federal Civilian agencies and the Intelligence Community. She joined Verizon in August 2020 after 4 years at Amazon Web Services (AWS) where she led the growth of cloud computing in the Department of Defense as the AWS General Manager for DoD. She also spent 15 years at IBM and a total of 21 years in the US Army.

At IBM, Jennifer served in various roles to include Vice President for DoD, Vice President for Federal Growth Initiatives, and Director for Smarter Analytics in the US East serving IBM’s largest commercial customers. Jennifer also led the Army account, the IBM Power Systems brand for the Federal Government, and the Systems & Technology sales organization for Federal Civilian agencies.

Jennifer also served for 21 years as a US Army officer. She was commissioned as a Second Lieutenant in 1989 and spent 11 years on active duty performing in combat in Operations Desert Shield/Storm in Saudi Arabia and Iraq and Operation Enduring Freedom in Bosnia. In 2001, Jennifer joined the US Army Reserve and was mobilized from 2004 through 2006 to serve as the Director of Resources for the Joint IED Defeat Organization. She retired from the US Army Reserve as a Lieutenant Colonel in 2010.