CREATIVITY IN SALES: Strategies for Shortening the Sales Cycle with John Asher

CREATIVITY IN SALES: Strategies for Shortening the Sales Cycle with John Asher

CREATIVITY IN SALES: Strategies for Shortening the Sales Cycle 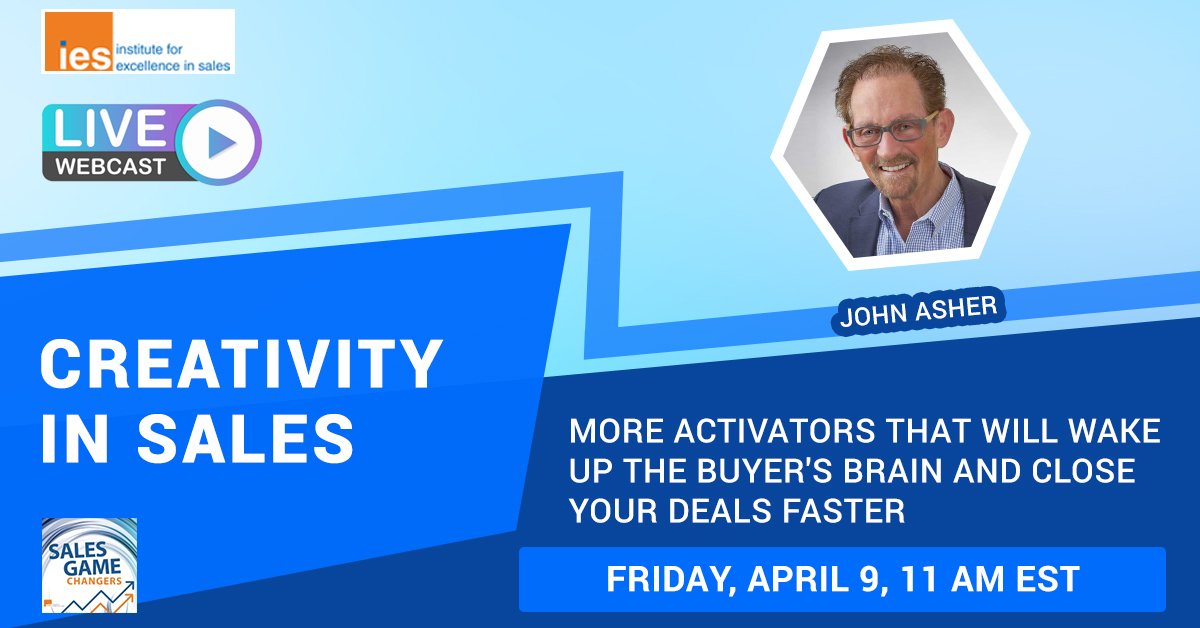 The IES is pleased the bring John Asher, author of the best-selling “Close Deals Faster,” on its weekly Creativity in Sales webinar for sales leaders and teams.

John is the world’s expert on neuroscience and sales. He says you’ll learn how to improve your sales skills from the latest neuroscience research to get the buyer to focus on you and your offerings.

Here is what you will learn that you can immediately use:

John Asher is an experienced international speaker on sales, sales management and marketing for Vistage, a world-wide network of CEOs.

He co-founded an engineering firm in 1986. He and his team grew the company at a compounded growth rate of 42% per year for 14 straight years. During his tenure as CEO, the company acquired seven other engineering and software development companies. His team sold the company in 1997 after growing annual revenue to $165m.

In 1998, he co-founded a sales advisory services practice that has grown into a global leader in sales strategies. These strategies include sales, sales management and marketing. His team has trained over 80,000 Executives, Salespeople and other customer facing managers in 22 developed countries over the past 19 years.

His team has advised a number of Global Fortune 5000 companies including Goldman Sachs, General Dynamics, Alibaba, China Mobile and 1400 other small and medium sized companies.

In his first career, John was the captain of two nuclear submarines like the Dallas in the movie “Hunt for Red October”. He completed his Navy career in the Pentagon as the Program Manager (buyer) of the $2B nuclear submarine combat systems program.

John is a graduate of United States Naval Academy with degrees in mathematics and nuclear engineering. He has a MBA from George Washington University.

He is the author of numerous sales training manuals and “Doing Business with the West”, published in China in 2012.